KATERI AND THE RENAISSANCE

FLORENCE, October 20, 2012 – It’s nearly midnight and tomorrow, October 21, is a day many in Christendom have been waiting for, to celebrate the canonization of Kateri Tekakwitha. I journeyed up to Florence today to see again the splendors of the Renaissance and ruminate in this fourth of a five-part series about our Mohawk maiden’s place in the order of things.

After visiting the David and Il Duomo and the Ghiberti’s baptistery doors, and strolling across Ponti Vecchio and passing a couple of hours in the heavenly Uffizi, I walked over to Santa Croce and sat in a pew. Giotti’s simple style was welcome after all the posed elegance, and I sat quietly among the tombs and memorials to Dante, Galileo, Michelangelo and Machiavelli. There it came to me.

Florence was the birthplace of the Renaissance. From here it spread throughout Europe, bringing a shift in thinking from the God-centered world of the Middle Ages to a Human-centered world in which we find ourselves today. Dante, who pre-dated the Renaissance, gave us a sublime medieval vision in his Divine Comedy, but as the Renaissance dawned the Medicis unearthed Greek and Roman sculpture and began focusing on man as an apt subject for art, literature and political theory.

Galileo saw two new heavenly bodies through a telescope, but was compelled to deny what he saw in because it didn’t fit into the church’s numerology that there could only be seven heavenly bodies because there were seven openings in the human body and seven deadly sins and so forth. Michelangelo undraped the human figure and showed human flesh, his David perhaps the crowning achievement of his sculpture. Machiavelli ripped the robes off rulers to display the harsh and naked political realities in The Prince. 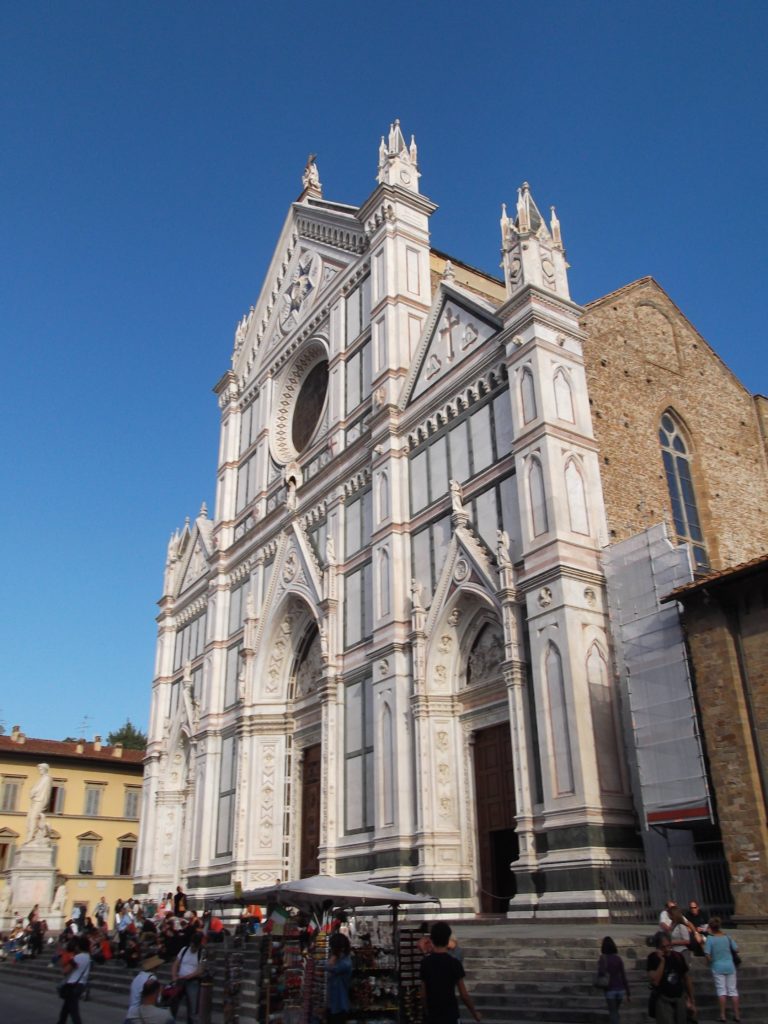 This new thinking made its way to Germany and Martin Luther nailed his manifesto the Wittenburg Cathedral in 1517 and started the Protestant Reformation. John Calvin in Geneva picked up the standard and the Reformation spread to France where Protestant Huguenots fought bloody religious battles with the Catholics, and Catherine Medici ordered the slaughter of Protestants in 1572. Tens of thousands of French Huguenots were murdered, and the war raged on. Much of the Jesuit fervor in the 1620s and 1630s was fueled by a counter-Reformation spirit, a re-entrenchment of Catholic values after Huguenots were expelled.

Moving from a God-centered world to a Human-Centered world, of course, creates doubt. With God in his heaven, all’s right with the world, but when man arises like Michelangelo’s David and stares the forces of nature and evil in the eye, an unsettling feeling can grip the collective vitals. One way to assuage doubt is to use reason, which Martin Luther and John Calvin advocated, and the scientific method, which was ushered in later. Descartes was formulating his cogito ergo sum at this time.

The Renaissance began the Age of Exploration, too, and Jacques Cartier claimed Canada and the St. Lawrence Valley for the French crown in 1534. Another way to conquer doubt is to test one’s beliefs in a new way, a new place. This is what the Jesuits sought to do. As France undertook to settle its colony, the Jesuits answered the call to spread the Catholic faith in a new direction.

Clearly when they set out to convert the natives of the New World they hoped the word of Jesus Christ would take hold because if they could access the mystical spirituality which the Catholic Church preached, a spirituality based upon faith, not necessarily on reason, they could demonstrate the rightness of their cause. In other words, if Catholicism works in the forests of the New World among human beings who had not developed metal or a written language, then surely it was the true religion and will work everywhere.

This is not to denigrate the sincerity of the Jesuits’ beliefs in baptizing natives and opening heaven to them, but rather to suggest a further cultural motive in their herculean missionary efforts, and to explain how all of Catholic France waited for each year’s issue of the Jesuit Relations as if it were the next installment of a serialized best-seller.

While crediting the natives with unusual spiritual gifts once instructed, the Jesuits nevertheless practiced a double-standard. They forbade natives from joining religious orders. Citing the natives’ unreadiness to take holy vows, presumably because they lacked the conviction to live up to them, Father Cholonec actually laughed out loud when Kateri Tekakwitha asked if she might found an order of nuns. She, however, prevailed and did persuade him to let her make a formal vow of chastity before the entire congregation..

Kateri’s supreme gift of faith in the love of Jesus Christ, from which all her other spiritual gifts flowed, was precisely what the Jesuits were seeking in their New World missions. Christ favored the poor and the downtrodden, and Kateri, a half-blind, orphaned smallpox-survivor had indeed turned all her hardships into a boon for being an outcast in her own culture readied her to accept the faith of the French.

As Father Claude Chauchetiere knelt at her deathbed and witnessed her transfiguration, this miracle completed his long and difficult spiritual quest. This native girl, this virgin, proved to be a pure vessel of faith, possessing the absolute certainty he had been seeking his whole life. In a larger sense, too, she embodied the discovery of a great spiritual treasure with which the Catholic Church had been seeking to assuage doubts brought by the Renaissance’s humanism and the Protestant Reformation.

Acting upon this belief, Father Chauchetiere began using bits of her clothing and dirt from her grave to effect miraculous cures among the French who saw her effect and joined in her cause. Interrupted for eighty years after the British ruthlessly cleared the French from Canada, her cause has steadily increased since 1842 when the Jesuits returned to Canada.

Kateri’s radiance has grown in brightness and penetration over the centuries. Later today – it’s after midnight now – Pope Benedict XVI will raise her up into the company of saints to lead us to new heights of enlightenment and virtue.

To those humble and overly educated men, the Jesuit missionaries, who left post-Renaissance France for the wilds of Quebec, Kateri and the others of the mission gave meaning and purpose to their great sacrifices. Our high-tech, digitalized material age surely brings more doubts than the Renaissance thinkers could conceive. May this humble Mohawk maiden, our newest saint, shine her bright light into our world and ease our doubts as she did theirs.

KATERI —LILY OF THE MOHAWKS was published by Staff Picks Press in October 2012, the month Kateri Tekakwitha was sainted by the Pope. It is available for purchase through the Troy Book Makers, through independent booksellers and through Amazon.